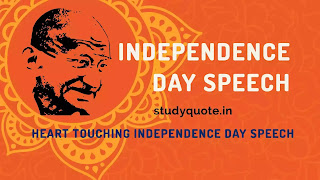 15th August is regarded as a red letter day in India. This day is remarkably significant because on this day of 1947 India seized Freedom from the farm grip of the British rulers. Since then all over the country celebrated this day as the Independence Day with great pomp and pleasure. Furthermore, it is the most auspicious day for the people of India because India becomes Independent after lots of hardships and sacrifices of the brave Indian Freedom Fighters.
On 15th August 1947, India achieved the Independence from the British rule. Pandit Jawaharlal Nehru elevated India's flag on the Red Fort. From that golden moment, the Independence Day was being celebrated in our Country with great grandeur and enthusiasm. In the country, everywhere procession was prevailed. Every people proceed to pronounce "Vandematram". The day is observed throughout India with flag-hoisting ceremonies, parades and cultural events. Everywhere the musicians sing the National Anthem ( Jana Gana Mana ) and everybody joins them. The school colleges organize various events to celebrate our Independence and to pay tribute to these Freedom Fighters. In school colleges, students give performance of nationalistic songs. Usually in offices, it is a off day but all the office stuff accumulate to express their patriotism for the nation. It is a national Holiday. Moreover, at various places people deliver speeches to inspire youth about the Freedom struggle. That day we not only need to be proud of our glorious past but work to make our present and future better. One of the main motives for celebrating Independence Day is to make the young generation animate of the sacrifices, we have made to make this country a better place for them. We need to make ourself so capable that we can praised it and present it. An oath is taken by everybody to serve the country and to do anything to restore the lost glory. Elderly people remember the martyrs who dedicated their lives in the fight for India's Independence. Homage is laid in the memory of great patriots who suffered a lot to win the Freedom of our country. On this day poor people are given food clothes and their smiling faces become bright with joy for glorious Independence. Independence gave us development progress and upliftment for the human resources.
So we should contribute to our great nations.
Credit : Pritam Duari
Similar Search Queries :
Upcoming Events
Next Post Previous Post
No Comment
Add Comment
comment url
English,English Grammar,English Writing Skill,Upcoming Events
Join Telegram Channel
যেকোনো প্রশ্নের উত্তর পেতে ও অনলাইন কুইজ এ অংশগ্রহণ করতে আমাদের টেলিগ্রাম চ্যানেলে যোগ দিন। https://telegram.me/Studyquoteofficial
[Free] Join now
Join our Telegram Channel To Get Latest Notification!
Subscribe To Our YOUTUBE Channel To Get Latest Notification!