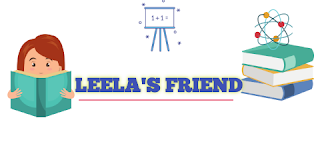 1. How did Leela try to educate Sidda ?

What was the paying role of leela to sidda ?

Do you think Leela is a real teacher to Sidda. - give answer in support of your reason.

What are the alphabets known to Leela ? How did Sidda get release from the clutches of Leela ?

In R.K. Narayan's short story 'Leela's Friend', Leela, a five year old daughter or Mr. and Mrs. Shivasankar, had an opportunity to over rule Sidda when she was a teacher. At dusk, she held a class for him. She had a box contained with catalogues, illustrated books and stumps of pencils. By means of these articles, she made him squat on the floor and pointing the catalogue to observe and write in copy form what ever Leela wrote in the pages of the catalogue. She learnt two or three letters of the alphabet and could draw a kind of cat and crow. None of these Sidda even did copy remotely such as crow and 'B'. She redoubled her efforts to teach him. Consequently she was forced to pin on the seat untill his wrist cracked.

Sidda tried to become free from the clutches of Leela and hid a plan that she is being called by her mother to dinner. Hearing this, she walked at a rage to her mother.

In this way the school hour had been ended.

2. What were Sidda's duties at Mr Shivasankar house ? What were paid to Sidda in return?

What were duties did Sidda perform at Shivasankar house ? What were given to Sidda in exchange of his duties ?

What was the problem of Mr. Sivasankar family ? How has he solved ? What was the ultimate result ?

Describe the incident pf Sidda's appointment as a servent in Leela's house.

In R. K. Narayan short story 'Leela's Friend', Mr. Sivasankar, the owner of this house had a great dilemma regarding the servant problem. While brooding over the servant problem, Mr. Shivasankar saw Sidda coming in to the gate. As to resolve the servant matter, Sidda was subjected to a suretiny by the members of the family. In response to that, Mr. Shivasankar recognised him that he would not be a bad sort of fellow. And he answered that he had worked in somewhere vague doctor's house near the market. Mrs. Sivasankar had suretinized him that he could not be worst than any burglar. Then Leela, five years old daughter of Mr. And Mrs. Sivasankar screamed in joy that he would be her real playmates.

It is resolved that Sidda was asked to perform different job such as washing clothes, tending the garden, running errands, chopping woods and looking Leela. In return, he was given two meals a day and four rupees a month.

Sidda was really a servant as he asked to perform different household job besides looking after Leela.

3. 'Sidda Come And Play' - who said this ? What kind of games did the Speaker play ?

How does Narayan describe Leela's experience of playing with Sidda ?

How did Sidda become Leela's Friend ?

How did Sidda function as a companion to Leela ?

How did Sidda spend time with Leela? Analyse the Relationship between Leela and Sidda.

The little girl and her servant played games with the red ball and the moon. Leela flung the ball at him and Sidda flung it back. According to the wish of Leela, Sidda threw the ball up and told the ball touched the moon. Leela was taken it back. Sidda showed Leela how the moon followed him and Leela easily believed it. Bit whatever be the game, they both enjoyed each others company.

He also used to tell the stories of Gods, animals, magicians, princesses to Leela when he was it bed. Leela in turn tried to teach Sidda the few alphabets that she had learnt. They become so closed to each other that Leela even accompanied Sidda ran errands.

4. Discuss the relationship between Sidda and Mr Sivasankar and explain the difference in their relationship at the beginning to the end of the story.

The ending of the short Story 'Leela's Friend'.

At the beginning of R.K. Narayan short story 'Leela's Friend', Mr. Sivasankar employed Sidda as a servent to his house. Sidda was given the charge of tending the garden, washing clothes, chopping woods and looking after Leela. He got two square meals and four rupees a month. In turn, he made Leela and her family supremely happy. But as soon as his wife reported him of thieving the gold chain of Leela he reported to the police. Therefore at the end of the story, appeared to be unfair to Sidda. His iggo and his supremacy as the master class seemed to be held responsible for making such a decision.

At the beginning of the story Mr Sivasankar appeared to be a thought full man. But at the end of the story he was a man of scrupulous mind. Sidda was nothing but a criminal to him and all the good work of Sidda were immediately forgotten. Sidda becomes a mere pittet in the hands of masterclass like Mr and Mrs Sivasankar.

Society accorded such milieu over the decade. The masterclass repented by Mr and Mrs Sivasankar put their sadantery looks over the servant repented by Sidda who was being accused of stealing the gold chain from Leela.

5. Justify the title of the story 'Leela's Friend'.

The title of any piece of writing is almost the sign board of a shop that indicates the central idea on the massage of the theme of a story. Like wise, the present short story 'Leela's Friend' written by R.K. Narayan is best against the malpractice of elite society towards then downtrodden people. Sidda is appointed as a servant to Mr sivasankar family in order to perform household chores and to look after Leela a five years old daughter of Mr and Mrs Sivasankar.

Initially, Sidda and Leela becomes Friend at the time of playing, learning, and running errands. Gradually the situation become worse while the gold chain, rounded by the neck of Leela had been missing. When the police arrested Sidda in charge of it, no one but Leela protested against these in a childish way. Leela become friendless after winding out Sidda as a devil to Mr Sivasankar family at the end.

The barrier of the society does not effect the child like Leela; but her family does not admit this.

So this title of the play become 'Leela's Friend' at the end of the story.

Sidda in R.K. Narayan's Short story 'Leela's Friend', is being treated as the 'Devil' because perhaps stole the gold chain. He is compared here to satan who was well-known for his treachery.

The police was rude to Sidda. He was carried by the police on account of stealing an armament i.e. the gold chain from an innocent child, Leela. He was called a 'devil' by the police inspector. Again, when Sidda didn't admit his theft, the inspector threatened that he could have to sit with him that night . Sidda was called a jail bird as he had been captivated several times. The police inspector humurously mocked at Leela by saying that she would not be a reliable prosecution witnesses for Sidda.

Sidda was not a born criminal. Being a representative of lower-middle class, Sidda was arrested out of suspicion.

7. What stories were told to Leela by sidda?what effect did these stories have on Leela?

In R.K Narayan's Leela's friend", sidda told many incompareble stories . Five- years-old Leela loved to listen the stories of sidda After dinner Leela ran to her bed. Then sidda had to be ready with a story. He sat down on the floor near the bed . He told her the stories of animals in jungles, of Gods in heaven and of magicians who could conjure up golden castles and fill them with little princesses and their pets.

Leela listened to the stories of sidda with attention . She was so fond of those stories that in the absence of sidda , she refused to sleep unless she was told stories by her mother.

8. Why was Leela so pleased to play the teacher to sidda ? How was sidda's condition then ?

In R.K Narayan's story, "Leela's Friend", Leela is the prime mover of the story. At dusk Leela held a class for sidda . She had a box filled with catalogues,illustrated books and stumps of pencils . She asked him to squat on the floor with a pencil between his fingers and a catalogue in front of him. Leela knew two or three letters of the alphabet. She also tought him to draw a kind of cat and crow . But sidda could not copy them completely. Then she redoubled her efforts to teach him.

Sidda became helpless while Leela teach him. Leela said that he was capable of controlling the moon but he was utterly incapable of playing the pencil. As a result Leela kept him pinned to his seat. Until his inflexible wrist cracked .

The mind of the Leela's mother was disturbed.

In the story , Leela's mother, Mrs. Shivasanker is an affectionate mother. Her mind was disturbed because the gold chain of Leela was missing. She also disturbed at the thought of sidda. She suspected sidda for the lost chain. She feared sidda inrefferance of police. She became feared also that sidda know all about the household. So he might come at night and loot. She thought that it was god's murcy that he had not killed her child for chain.

In R.K Narayan's "Leela's Friend", the gold chain that Leela always put on her neck was lost.

In the story, everybody in the family of Mr. Shivasanker suspected sidda for this. Only Leela did not suspect sidda. Leela's mother, Mrs. Shivasanker's suspicion first fall on their servent, sidda. Because she noticed that the chain was missing after sidda and Leela come home from the shop of sugar in the evening.

A few days later, Leela's mother went to the kitchen. She suddenly put her hand in a tarmarind pot. There she found a chain and took it to the tap to wash it. It was mistakely Leela's gold chain. Thus the chain was found finally.