● "Eat Some More Son" - Who is the speaker ? What is offered by the speaker to the listener ? What picture of the speaker's character is revealed in this line ?

● What did mrs. Jones do after taking Roger at her residents ?

● How did the auther of the story present the motherly affection in delicate touch ?

● "The Woman never is a rough but calm and peace of mind" - Elucide the statement in referance to your answers? 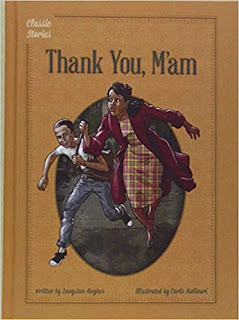 Langston Hughes
The speaker here is Mrs. Luella Bates Washington Jones in Langston Hughes short story ' Thank You Ma'am '.
As Mrs. Jones thought that Roger was hungry, she offer him a supper of lima beans, ham, a piece of cocoa made of canned milk.
When mrs. Jones was returning home alone at the dead of night, a teen aged boy named Roger tried to snatch her purse but failed. She kicked Roger and shook him until his teeth rattled. She was very strict with him but once she reached home and became an altogether different person. She told Roger to clean his darty face and to comb his hair. She heated some lima beans and ham she had in the icebox, made of cocoa and served to Roger. Her Generosity moved Roger and pleased him. She also gave him ten dollers to buy blue jeans and shoes for which he tried to snatch her bag. Thus the picture of a true mother is revealed under her apparently rough and tough personality.
Similar Questions
4.94 / 169 rates
Thank You Ma'am