The Proposal - An One Act Play _ Important Long Question

● Why is the marriage Proposal important to all the character of the drama " The Proposal "? 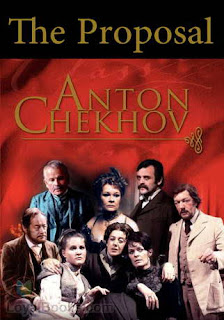 The title of Anton Chekhov's farcical one act play " The Proposal" indicates that the play central round the theme of courtship. Marriage is thought to be a sacred bond between two 'true minds'. But in this play marriage is nothing but a social economic stability and security. Chubukov, the father, natalya, Chubukov's daughter and Lomov all belong to the moneyed and owner class Lomov wants to marry Natalya not because he loves her but because he wants to establish his grip over the Oxen Meadows. On the other hand Natalya wants to marry Lomov because of her fare and fortune. Chubukov cosiders his unmarried daughter as a durden and wants to get rid of her. So he is pleased when Lomov asks for his daughter's hand in marriage. Thus , the Proposal is important to all for own reason's - one thread being the same everywhere the financial aspect.
Natalya's father accepted the unspoken proposal on her behalf and she readily give her consent. Thus, we are left wondering if only the proposal could create such a Chaor what their married life would be like. Therefore the title is appropriate in all respect.
Similar Questions
4.94 / 169 rates