Now we all know what is republic day , so people may have questions in their mind that why is this celebrated , what are the past happenings due to which it is celebrated. 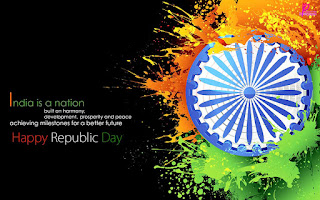 The main reason behind the celebration of republic day is that on this day that is 26 January 1950 our means INDIA'S CONSTITUTION was imposed that means the rules of the constitution were made legal.Everyone has to follow these rules from that day.Our country became independent republic.When our country was the under the rule of UK that is BRITISHERS we do not have any constitution or set of rules of our own our rules were based on the modified colonial Government of Indian Act 1935.

On 4 November 1947 the first draft of constitution was presented to the assembly , but it was signed by the national assembly on the 24 January 1950 in two languages Hindi and English.Our constitution came into effect on 26 January 1950.At this time DR B R AMBEDKAR was the chairman .This day was marked as the birth of modern India.This day was choosen because this was the day of PURNA SWARAJ on 1930.Afer almost 1200 years our country gained control over its own it was self dependent , having rules of its own.On this day world's longest constitution was presented for the world's largest democracy.It constituted of total 448 articles.
Our constitution makers took the best aspects from other countries' constitution . The concept of liberty , fraternity , and equality came from French constitution and the Five years plan came from USSR constitution.
According to constitution people had power to select their own representatives for democracy. RAJENDRA PRASAD was selected as the first PRESIDENT of INDIA and took oath at the DURBAR HALL at government house followed by a presidential drive to the IRWIN stadium , where India's flag was unfurled.

After the above incidents , this day is cve ielebrated with festivities and patriotic fever in India.It is celebrated in India on 26 January in capital of India that is new delhi at RAJPATH before the president of India.On this day a huge parade is performed by all the three wings of India's defence that is Army , Airforce, Navy.They all perform a huge parade and different programmes as a tribute to India , to its cultural heritage and many more.The parade commences from RASHTRAPATI BHAVAN , RAISINA HILLS on Rajpath past the INDIA GATE.In the parade India's defence capabilities , cultural and social heritage is displayed.
In addition to the the three wings, 9 to 12 different regiments march past the rajpath along with their bands and different equipements. Many other different para millitary forces and other civil forces take part in the parade.Different weapons are displayed on this day like missiles, tanks , guns , fighter jets and many more.The President of India takes the salute amongst all the other people and governments officials.
Apart from the armed forces different folk groups , tribal groups take part in the parade to represent their state and the culture , heritage of the states.They perform different dance , songs in front of the guests sitting in the parade.On the parade a christian song ABIDE WITH ME is played as it was believed to be the favourite song of Mahatma Gandhi.
Similar Questions
4.94 / 169 rates